The good, the bad, the odd: 17 things I learnt about life in the Philippines during my 8-year stay

I first visited the Philippines in 2012 to take on the biggest challenge of my career so far. I was engaged in a major project to set up an offshore delivery and shared services operation for one of the largest resellers of Australia’s largest telco. Eight years, two new family members, two business ventures, and two high performing operations established later, I left the Philippines for New Zealand in December of 2020.

It is not hard to fall in love with the Philippines, an island teeming with natural wonders and booming with hardworking people.

Looking back on my time, I have compiled a list of the good, the bad, and the odd things about my life in the Philippines and Filipinos.

1. Everyone smiles and laughs

Filipinos are generally very happy people. They smile a lot and laugh a whole lot more, which oftentimes becomes contagious. They giggle and joke with and at each other every time they have a chance. And the most wonderful thing there is that they don’t get offended that easily, even if sometimes their jokes sound harsh. Don’t be surprised if you ever hear someone from a jeep shouting at you, saying “Hey, dude! Wassup!?” They probably think you’re American, not that there’s anything with that, but it did bring a smile to my face. Given the country’s history with American colonisation in the early 20th century, it should not be a surprise that they would think most of the foreigners they see are from the US. So, if someone you meet calls you “Joe,” just give him a smile and nod. He means no harm.

In the Philippines, wakes become family reunions where you see long lost relatives and uncles laughing, drinking, and even gambling. Filipinos also celebrate the 40th day of their loved one’s death, either by hosting actual celebrations or posting the dead’s old pictures on social media. They also pay their respects to the dead every year, during death anniversaries and during “All Souls’ Day” in November where crowds gather in graveyards to eat, drink and remember their loved ones. To be totally honest, I still feel a little uneasy seeing posts of dead relatives in their caskets but love how death is a celebration of life and not just a time for sadness.

Filipinos call it the “-ber months.” As early as September, you’ll see Christmas sales and promos everywhere. Homes and offices are decorated with Christmas trees and lights. Christmas songs air on the radio. It’s a great time of year to be in the county. Who wouldn’t want 3 months of Christmas? Not surprisingly, my kids loved it. And while Christmas kicks off early in the Philippines, it ends in a flash in December. In Australia and some other countries, businesses close and people take up to two weeks of work. In the Philippines, a couple of days and everyone’s back to work.

5. Patience on another level

Part of daily Filipino life is sitting in traffic for hours and waiting in long lines. In other countries, these things would result in pandemonium with people shouting at each other or angrily honking on the streets. In the Philippines, however, everyone stays calm with occasional peeps and beeps. It can take a while to get used to, but when you see everyone else smiling, gossiping, even dancing in long queues, it’s hard not to go with the flow — patience bordering on Zen.

While the city is a frantic place to drive, out-of-town trips in the Philippines are breathtaking. From mountains, island networks, to white-sand beaches, modern wonders to historical places, there is always a place for everyone. With over 7,000 islands making up the country, you will never run out of beautiful places to go to. Taking long road and boat trips are some of things I miss most. Other than so many beautiful beaches, my pick would be Baguio.

7. A sweet love affair with food

8. Making the best out of any situation

Life can be hard in the Philippines but rarely do you see Filipinos having a bad day. Flooded streets? The kids will turn that into a pool. Blackout at night? That’s a cue for having a drink with the neighbours by the street. Quarantine restrictions? They’ll have games and party over the internet. Filipinos always find a way to have a good hearty laugh even in the direst situations.

Weddings are big in the Philippines. And when I say big, it’s at least 100-people big, often more. Relatives, extended families, friends, friends of friends, even officemates are all invited. They have a different custom for weddings in different places. In some regions, they stick money on the couple’s garments, while in other regions they throw rice instead of confetti. If you get invited to a wedding, don’t miss this great opportunity. You might be asked to be a sponsor, but don’t panic. It’s not as it sounds and is considered somewhat of honour.

10. They can have non-alcoholic fun

Not that this should be such a surprise but coming from a culture where alcohol is often at the centre of every event, it was a pleasant change. Filipinos love to party, and many of them are amazing singers and dancers—natural performers. Not a singer or dancer? No worries as it appears talent isn’t required. I was amazed to see the confidence of some without such talent get up and perform like a superstar. These people are the life of the party, and often without a drop to drink! It just goes to show how much fun Filipinos can be.

11. Getting a rock star treatment at personal events

Filipinos love to celebrate, so don’t be surprised if some local you’ve acquainted with recently will invite you to a personal event like birthday celebrations, house blessing, or weddings. And when you get there, expect some rock star treatment. Everybody would want to know you. They will serve you the best food and pay attention to your every need. Expect lots of photos. It’s crazy but that’s a taste of Filipino hospitality for you.

Filipinos have a big heart. They always try to help if they think you need one. They’ll donate even when they already have little, to begin with. When someone has a personal problem or a sick loved one, everyone pulls together to raise money. During the pandemic, they set up “community pantries” where people can “give what they can and take only what they need for free.” When everyone gives a little, it goes a long way. Such a great culture. 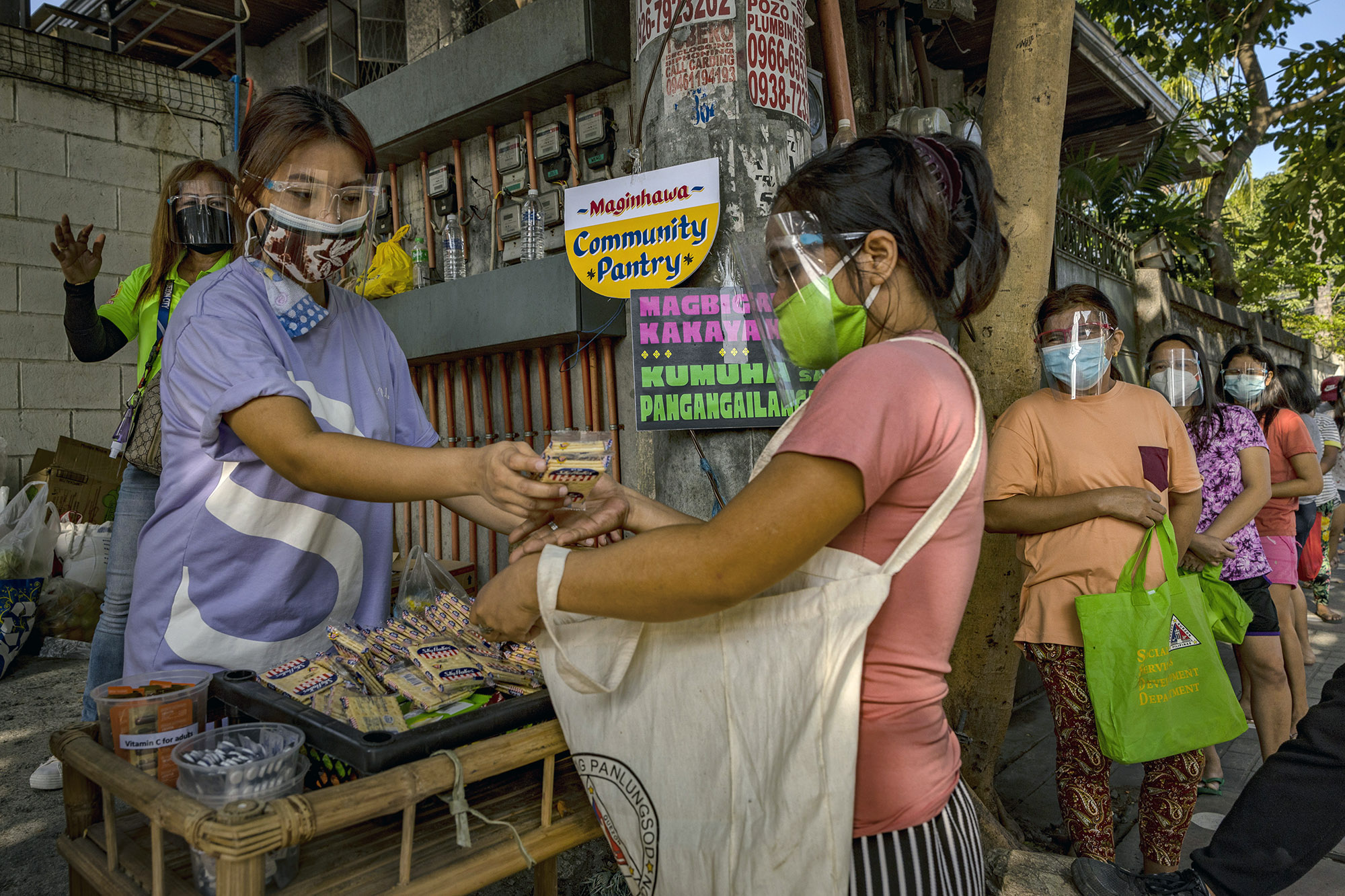 13. The spirit of volunteerism is alive in the Philippines

Helping is a Filipino instinct. I have been impressed by how many people give up their free time to help others, without a second thought. Whether visiting an orphanage to play with kids, paint houses, or just deliver food and clothes to those less fortunate, Filipinos look out for each other and are the most giving people I have met. We could all learn a lot from this approach.

Filipinos are very welcoming. They don’t want anyone feeling out of place, may it be in big gatherings or casual meetings. They would always approach you or say hi, ask you about your day. Don’t be surprised when you are asked to join them for lunch, saying “Let’s eat, sir”.

15. Everyone’s looking out for your kids with genuine care

Filipinos are all about family, and it doesn’t stop with their own. There is genuine care for the well-being of others, especially kids. Don’t be surprised if someone steps in to help your kid if they stumble, or even suggest that they need warmer clothes in an airconditioned mall. This can take a bit of getting used to, but once you understand that it comes from a place of genuine care, it’s a nice feeling. Ask anyone that has travelled with small kids on a domestic flight. The flight attendants don’t think twice about stepping in to give you a break from your screaming kids.

Saying Filipinos are hardworking is an understatement. Filipinos are passionate workers. Give them a job and they will give you their best. If there is work to be done, trust that they will keep working until it is done. That’s just how they are built.

Read More: How to Foster a Productive Culture for Your Offshore Team

17. A heart for adventure

Filipinos often travel and go on day trips with fellow workmates. They camp, hike, take beach trips, or just hire a house in the countryside to hangout. Filipinos often refer to their workmates as their work family, which is why a business culture that embraces Filipino culture is essential.

The Philippines has a diverse culture, and there’s so much more to explore on its islands. It’s also an experience itself to be working with the hardworking Filipinos. I can tell more about this place and its people but it will be better if you get to experience it yourself.

Andrew Mault has spent 8 years in the Philippines, working with thousands of talented Filipinos and businesses across the globe, helping them get more out their venture offshore. Andrew has 25 years’ operational management experience, with the last 16 years working in outsourcing and offshoring.